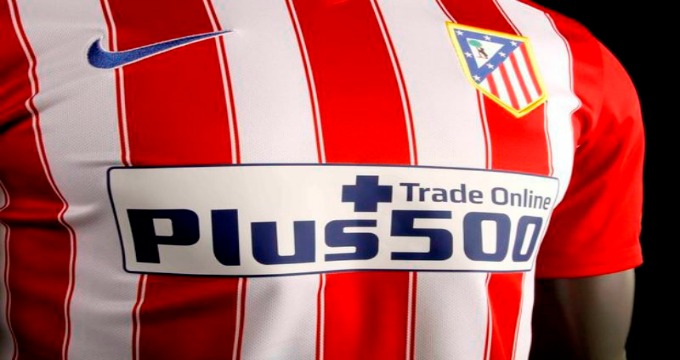 Plus500, an israeli brokerage house, mentioned mostly due to ist acquistion by Teddy Sagi’s Playtech, has signed a new agreement with Atlético Madrid about being its major official sponsor for the 2015/16 and 2016/17 season.

Plus500 was Atlético’s back-of-shirt sponsor for the second half of the last season with an agreement from January 7, 2015. Nevertheless, front-of-shirt position impressed the Israeli broker and Plus500 became successful during negotiations with the Spanish club, moving to the front as major sponsor.

Thus the agreement with Plus500 replaced a previous one with ‘Azerbaijan, Land of Fire’ as the major sponsor of Atlético during the 2014/15 season, while both partnerships were brokered by WH Sports Group and Sportfive.

Now Plus500 will enjoy further branding rights at stadium and even beyond as well as a hot of other sponsorship benefits. Plus500 logo will be now seen on frontside of shirt of Atlético Madrid even on UEFA Champions League.

Financial terms are not disclosed yet, but indications speaks about €11 million annually paid to Atlético Madrid. This is naturally much higher as the previous agreement, which has been only over €1 million, but even that time both sides mentioned that they are “actively considering extending and expanding the relationship for further seasons.”

PLus500’s CEO Gal Haber, said: “We are honoured to extend our partnership with such an illustrious football club as Atlético Madrid for at least 2 more seasons, which has established a strong pedigree for well over 100 years.”

Miguel Ángel Gil Marín, CEO of Atlético Madrid, stated: “We are delighted to have expanded the partnership agreement with Plus500. This is an exciting period for the club as – like Plus500 – we grow our international footprint. We believe that this partnership with Plus500 will support this progress, and we look forward to sharing our journey with them.”