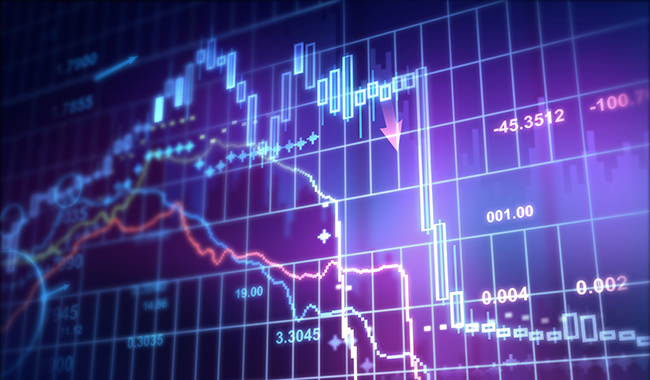 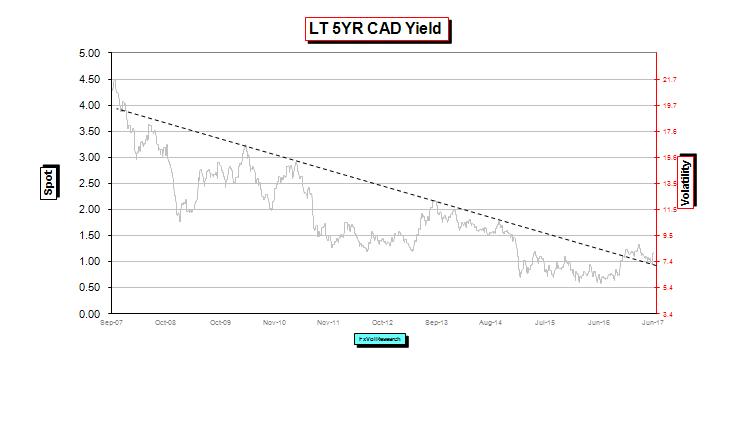 The tone of Canadian fundamental releases has turned an important corner & this change in sentiment is best reflected in the rise in both short and medium-term bond yields. The chart above is the 5YR Canadian Bond yield back to Sept 2007. The LT downtrend had already been broken and last week’s price action shows the market simply bouncing off of that long-term price support.  The BoC is now expected to start to unwind the extreme levels of monetary accommodation starting as early as Sept or Oct of this year. In practical terms, this suggests that the BoC and the Fed will now be acting more in sync. Expectations of C$ weakness based purely on widening interest rate differentials alone will now start to fade to the background. 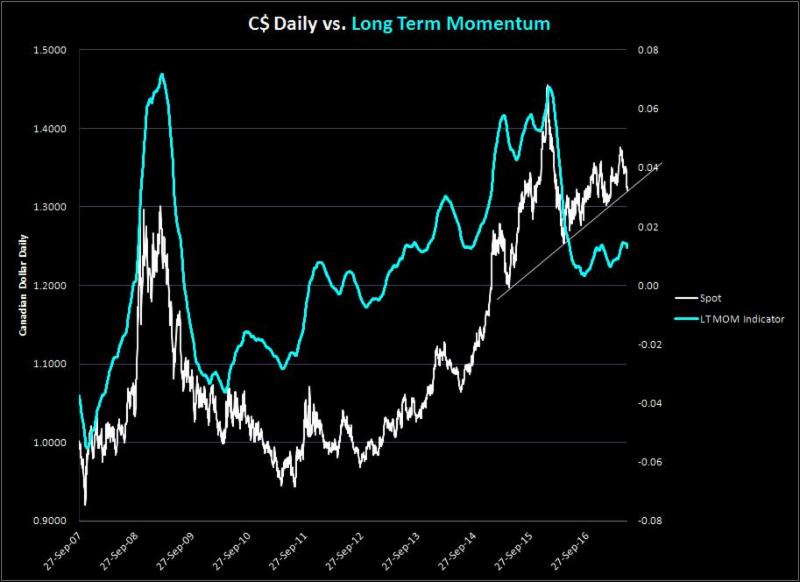 Looking at long term charts the C$ is still (just barely) holding its LT uptrend but this could easily be violated in the near term. Long term momentum is also showing signs of rolling over and potentially moving back to neutral. Despite this week’s price action & sharp spot moves, going forward we are likely to see more price consolidation, albeit with the C$ exhibiting a stronger tone. Volatility tried to break under the 6% level in the 3 month period and held,  but the downtrend is likely to resume. Short-dated vols are now quoted under 6%. 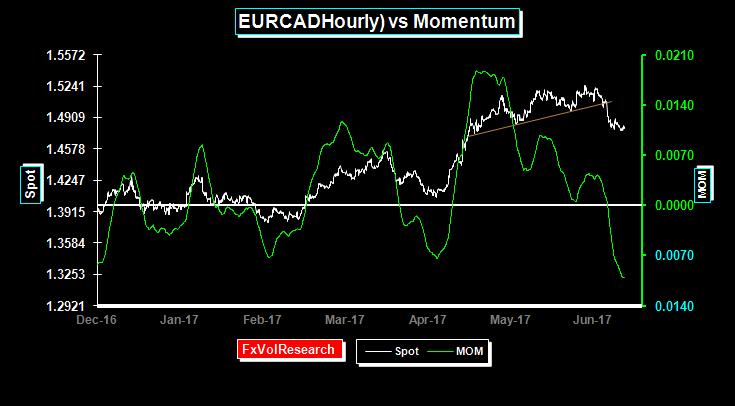 Also as we have pointed out here for the last two weeks EURCAD has been showing very strong signs of momentum divergence and this finally played out into a weaker EUR this past week, with momentum moving solidly into negative territory. The move was primarily driven by the CAD rally. The EUR ended the week little changed but also with increasingly muted upside. What supported the EUR vs the Dollar was the string of somewhat weaker US fundamental releases earlier in the week but this gave way later in the week to a more hawkish tone from the Fed. 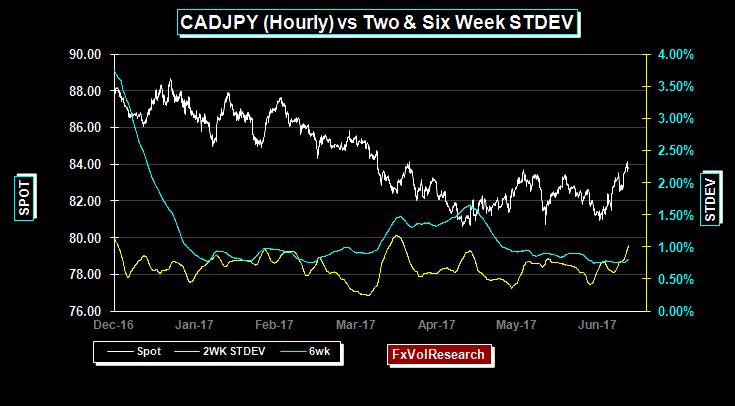 Technical models based on the Vortex indicator went long CADJPY last week around the mid 82.50. Since Dollar-yen seems intent on following 10YR yields, and CAD rates are set to firm CADJPY could well be poised to test the 85/86 levels. Interestingly one-year CADJPY risks reversals are still quoted at a discount to the same risk reversal vs the dollar. 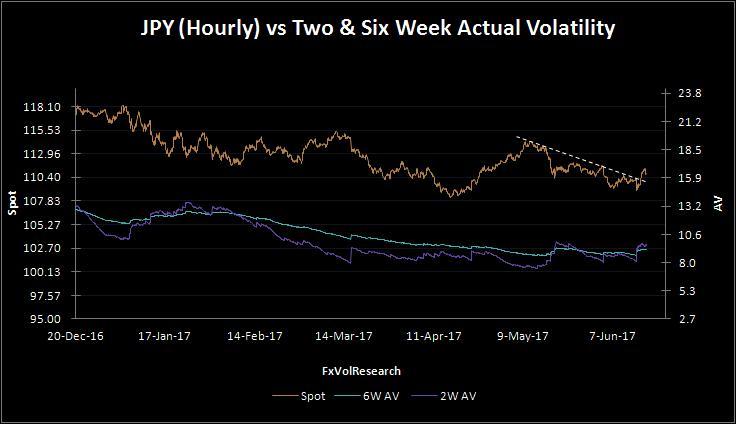 Above is dollar-yen hourly showing a break on Friday of the trendline. Less significant is the slight pop in the two-week actual vol. 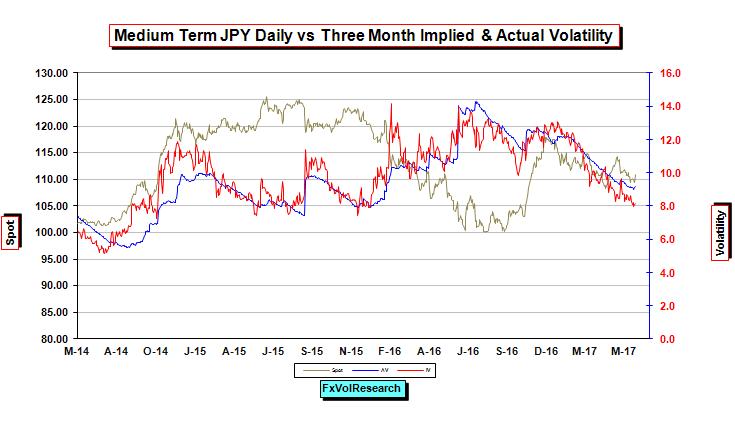 Three-month yen Vols are now testing the 8% level and with IV-AV spreads now negative, the 8% level should hold in the near term. 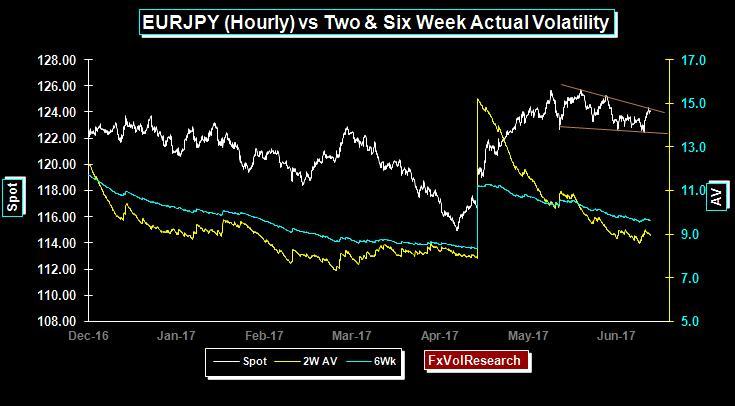 EURJPY is remaining in a declining wedge formation with falling actual volatility. 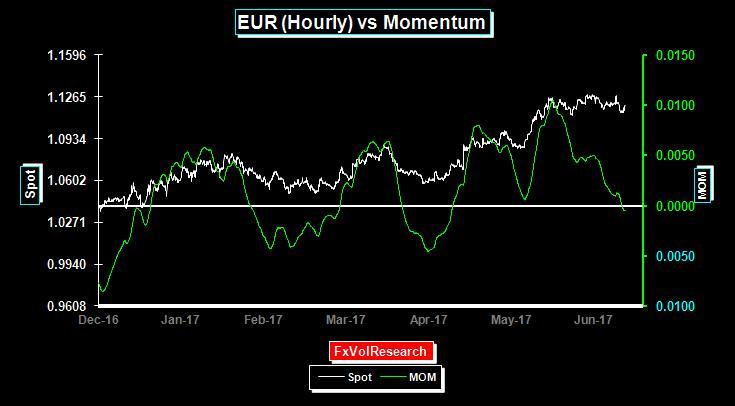 More signs that the EUR upside is limited as EUR momentum moves into negative territory. 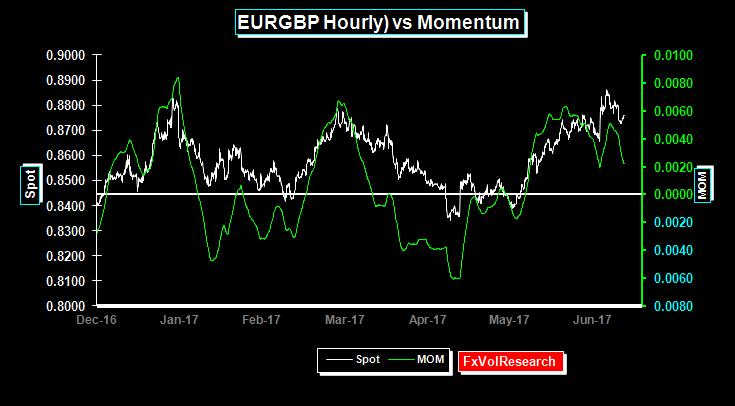 Signs of EURGBP momentum divergence may be an indication of a market that is overly long EUR and short GBP. 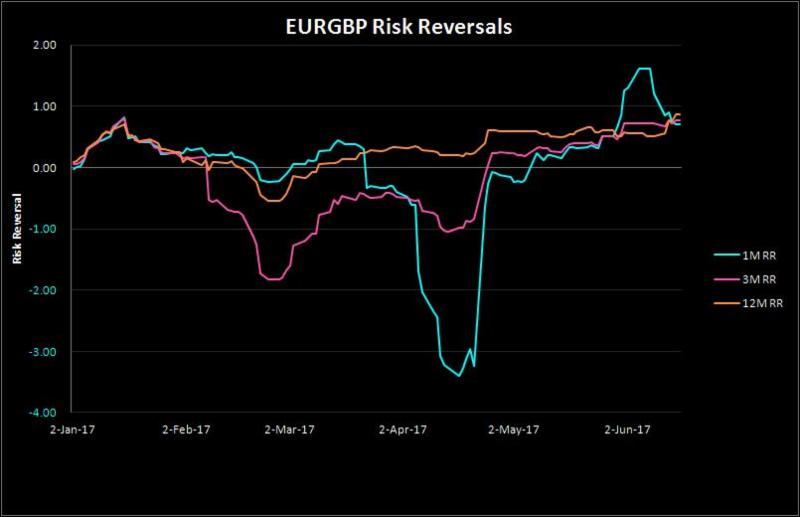 One month EURGBP risk reversals are well off their highs but the 3M and 12M are remaining bid for EUR calls. 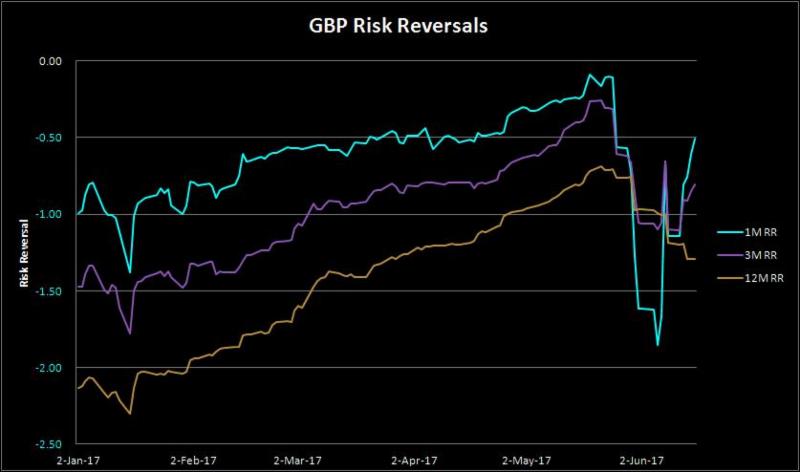 Similarly, both one month and three month GBP risk reversals are well off their lows, however, the one year as moved in the opposite direction suggesting greater demand for longer-dated GBP puts. 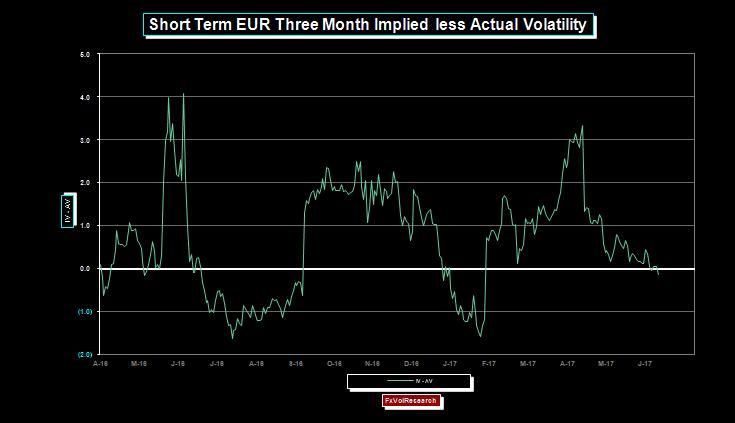 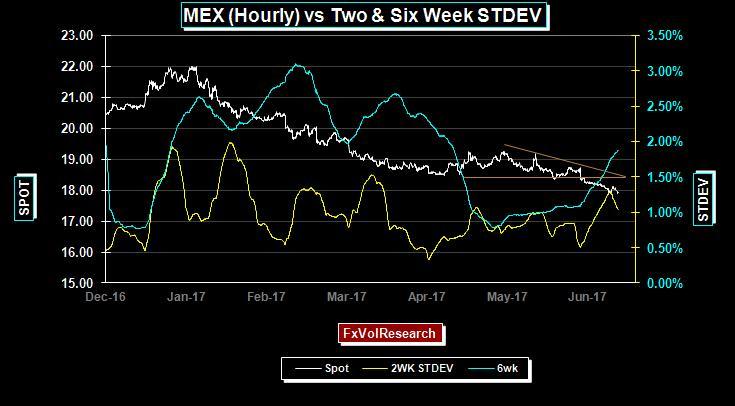 Meanwhile, the MXP continues its slow grind higher vs. the Dollar. MXP risk reversals continue to lose their premium for $ calls in the front end of the curve, however, the back end is holding stable with little change for one year Dollar calls. From its weakest level of around just over 22 to the dollar to Fridays close just under 18 the peso has appreciated by nearly 19% this year.