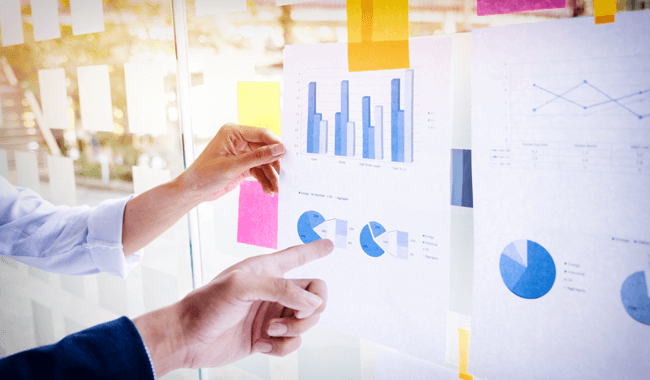 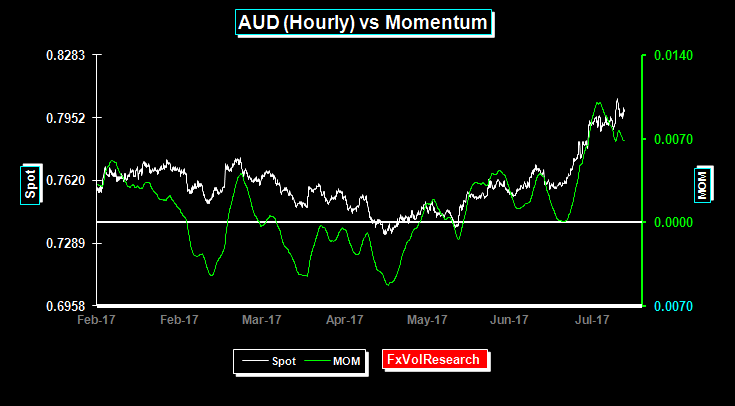 More signs of AUD momentum divergence. Despite the strong commodity price back drop the odds of consolidation are high. 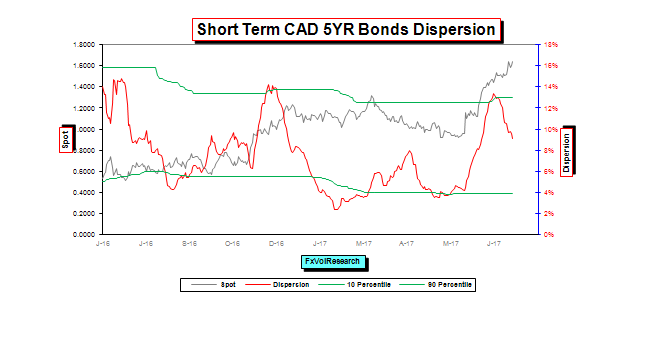 The sharp narrowing in US-CAD interest rate spreads should stabilize in the near term and expect a period of sideways consolidation. Another rate hike in the Fall is already in the prices and given that the appreciation of the CAD is equivalent to in excess of 300bp of further tightening the BoC may start to send messages that following another rate hike they will go back to being data dependent. 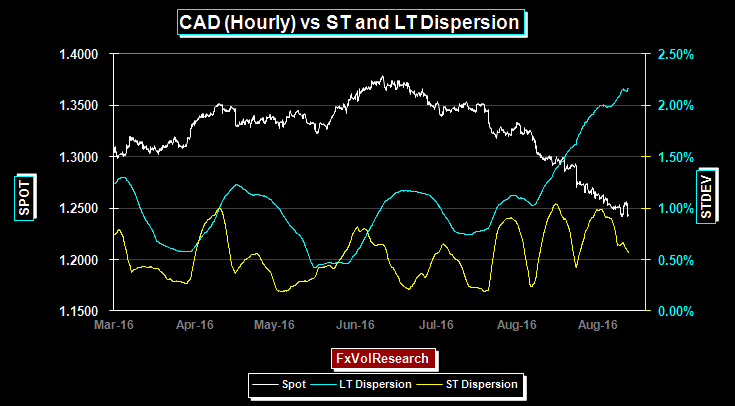 Short term dispersion readings are rolling over; however as a note of caution the LT measures have not yet done so and suggests we are not yet at the spot turning point but awfully close. 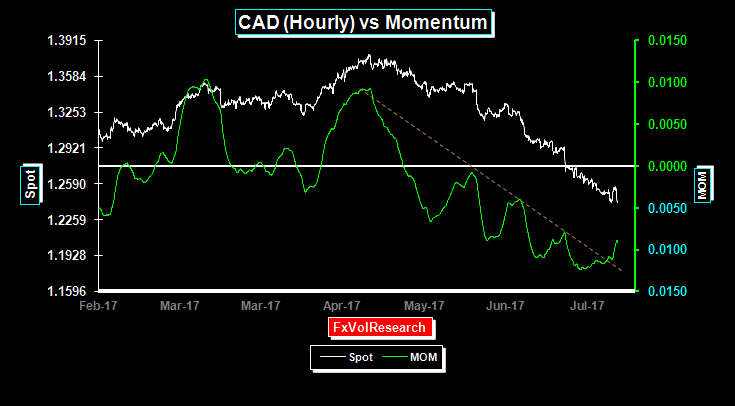 Some signs of momentum exhaustion on the downside. 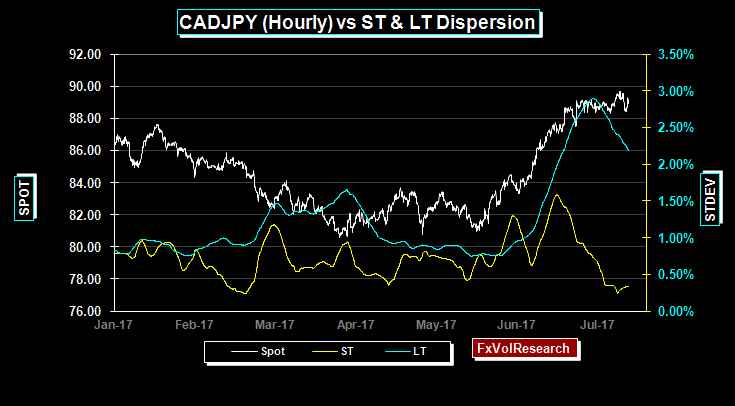 CADYEN also showing signs of top side exhaustion. With ST readings low and LT rolling over a sharp move back into the range would seem likely (lower CADJPY), followed by consolidation. The short term CAD rally looks over extended. 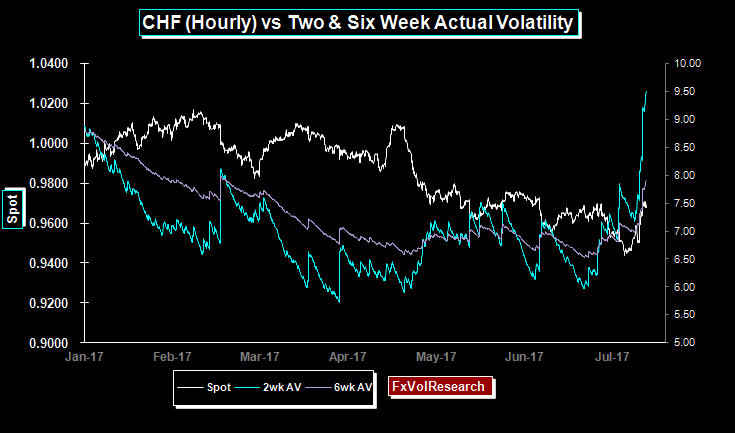 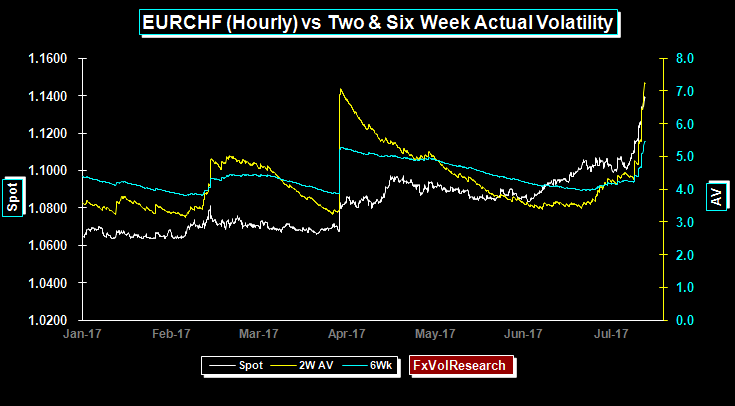 EURCHF actual rise sharply on the carry led unwind of CHF vs EUR. We pointed out here last week the potential signal with the break in the two-week actuals over the six weeks. Not always, but often it can be a leading indicator.  The SNB has openly complained about the CHF strength and the OECD calculates that the CHF is 23% overvalued. 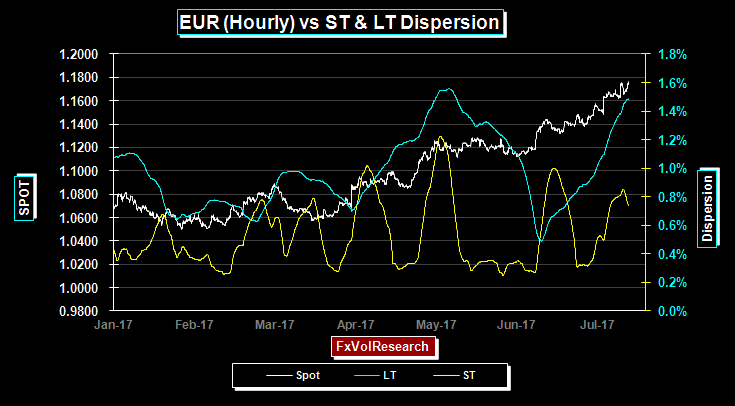 The move up to the 1.1200 – 1.1300 level was a justified reaction to the French election. The period of consolidation that followed and signs of momentum exhaustion seem to suggest at the time that the EUR rally had been overdone.
The move up from 1.1300 up to 1.1700 can be directly associated with the growing political uncertainty created by the Trump Presidency. Wider EU-US interest rate spreads may be required to mitigate the increased risk premium need to mitigate the political risks. While Dispersion indicators appear stretched there is no convincing sign that an EUR top is in place. 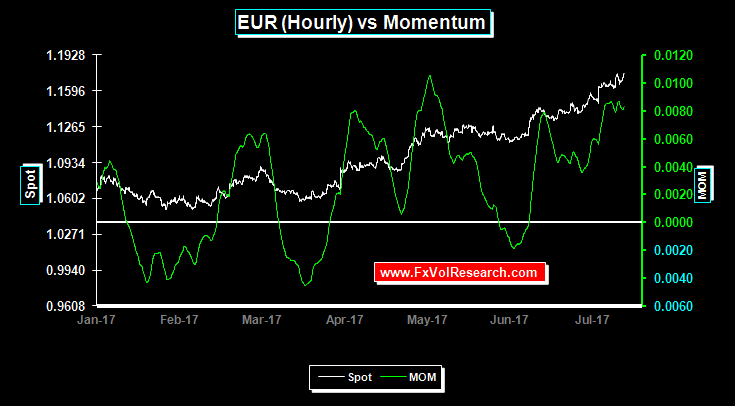 Slowly making new highs with momentum lagging. While the move is getting extended it is still not enough to suggest a cyclical top. 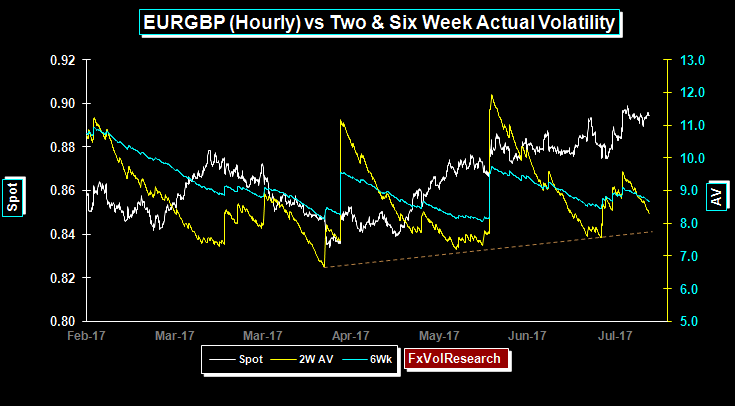 Remains in a very choppy uptrend. 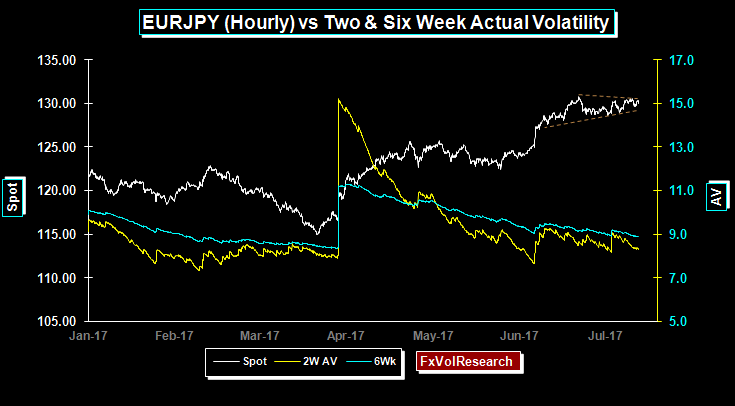 EUR and JPY price action more correlated and this is evidenced in the decline in the actual vol trends. 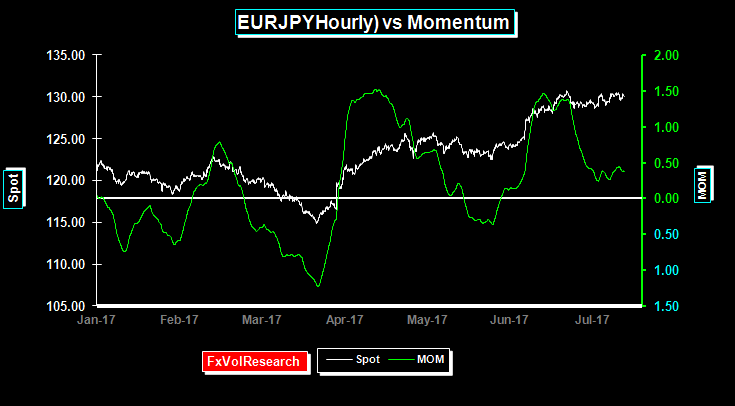 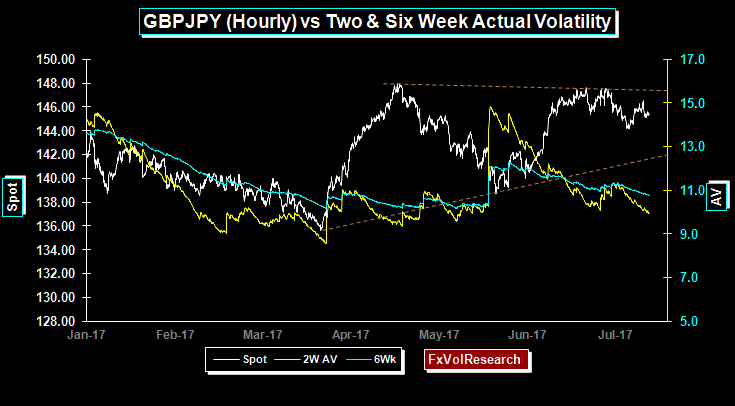 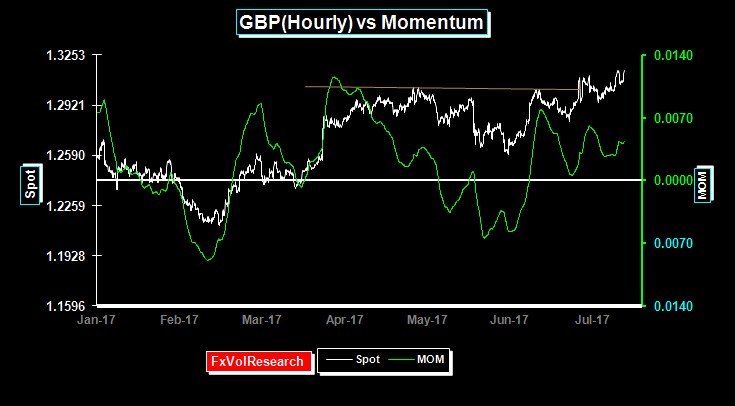 Despite breaking to a new recent high the momentum divergence suggests that GBP is vulnerable. This chart on its own suggests GBP weakness will re-emerge in the coming weeks. 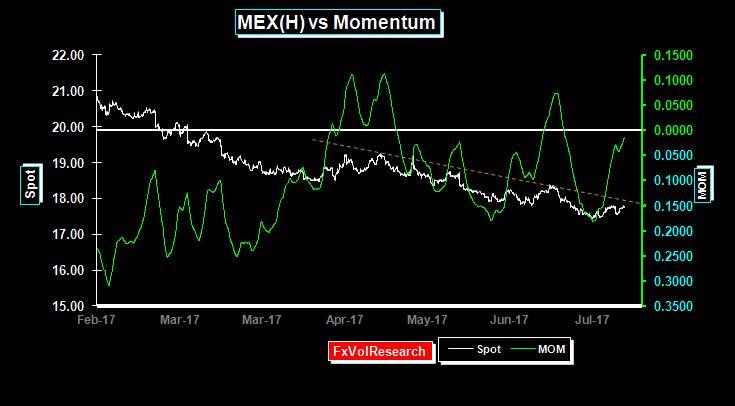 One year MXP risk reversals continued to move better bid for US$ while. Calendar spreads, that take advantage of the slope of the MXP curve, as well as the spread between 3M MXP risk reversals and 12M also make sense. This trade is implemented by selling the one year 25Delta puts and buying the 3M 25 delta puts. 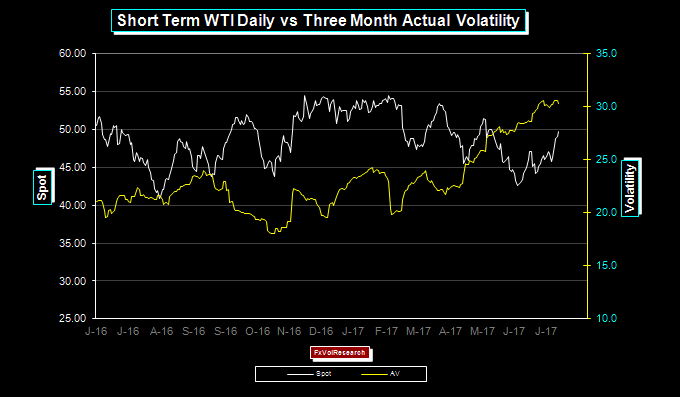 WTI is holding within a broad, but volatile consolidation. Very good support at 42-43 and lots of selling interest above 52-55. 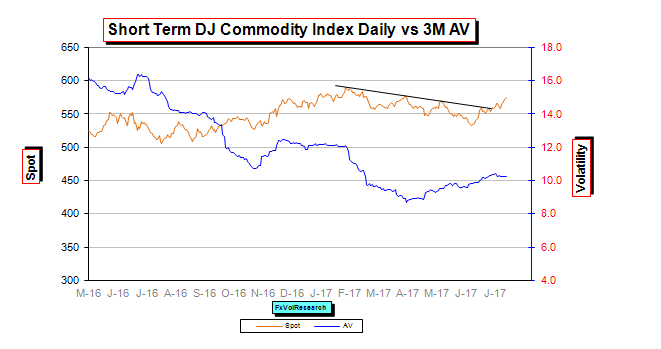 Broad commodity price gains continue,  but within the context of a  more muted rise in the DJ index actual volatility. 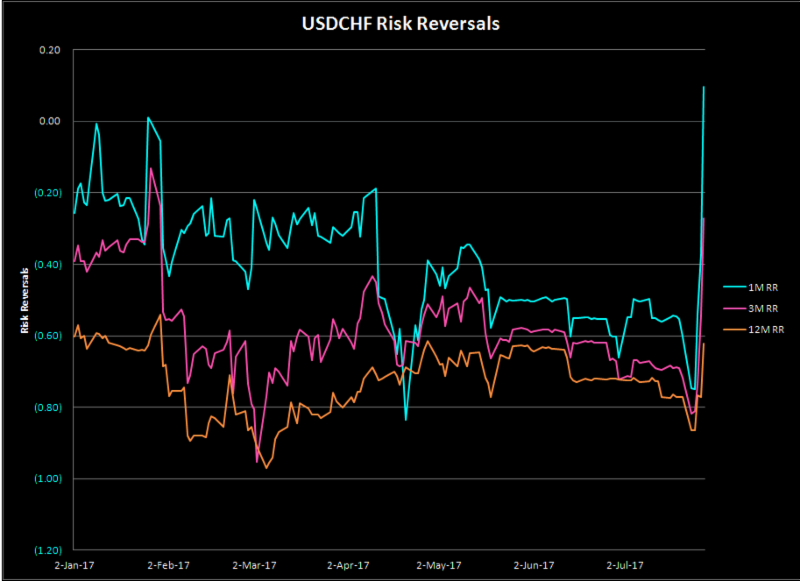 A very sharp rise in CHF risk reversals in favour of the US$. One month CHF risk reversal is now actually showing a premium for $-calls, while the longer dates are still bid for CHF, calls but with much-reduced CHF premiums. 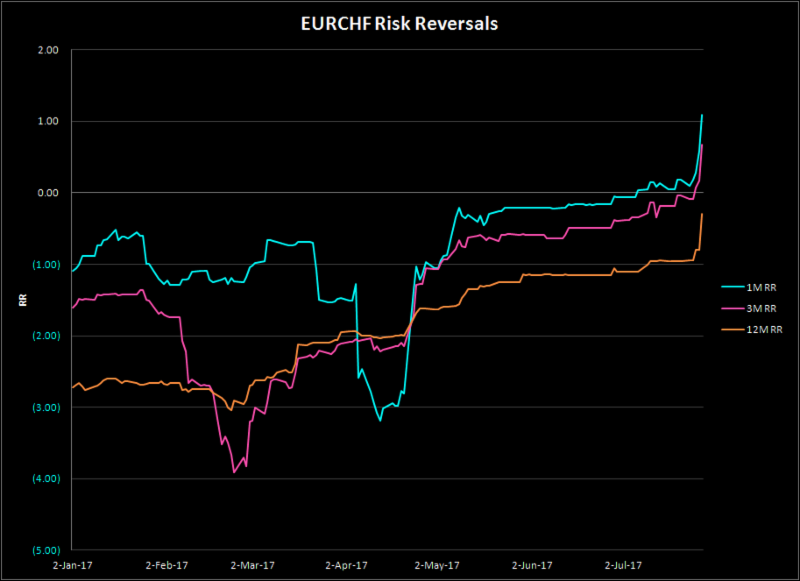