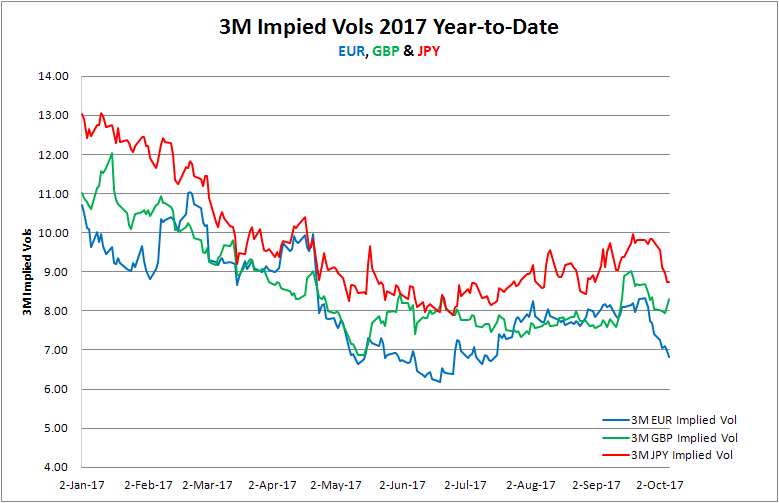 Three-month GBP vols rose on the week following renewed political fall-out following May’s party conference speech, while both Yen and the EUR vols moved lower. EUR vols were particularly hard hit and threaten to reverse the slow six-month rise we have seen from mid-June. The implications of the EUR vol decline suggest that the market is anticipating a period of price consolidation.

The US NFP initially lead to a test of the 1.1690 area in the EUR and over 113 in the Yen, however, both currencies ended the day off their lows. If we are about to enter a period of EUR consolidation, with risk reversals still expensive, one way to play it would be to buy three-month at-the-money forward EUR calls and sell the three-month EUR calls as a spread. 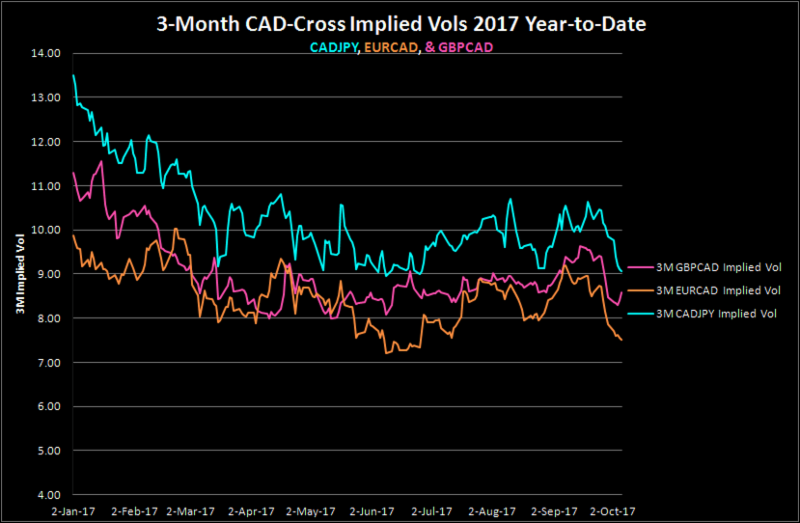 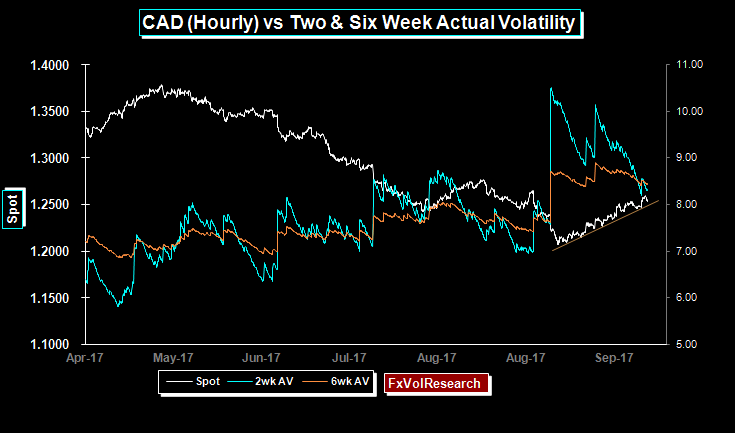 CAD is still holding the hourly price trend line while actual vol is now clearly declining. The CAD employment report was more or less as expected,  the only blemish was that most of the rise in full-time employment was in the public sector.  In order to validate our long-term view that CAD should correct back to 1.3000, the 1.2500 area now has to provide consistent support.

Signs of deterioration in the upcoming NAFTA talks are a potential negative driver, particularly if the Trump administration should move to scrap the deal in full. Meanwhile, the lack of volatility in the commodity space is supportive of CAD and two-year yield spreads are still marginally positive. 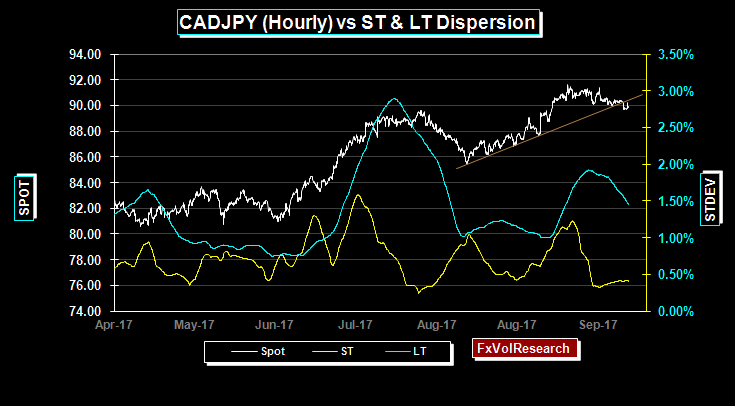 CADJPY is losing its topside momentum as LT dispersion is falling. This is in line with other indicators of potential Yen strength seen in USDJPY and GBPJPY. 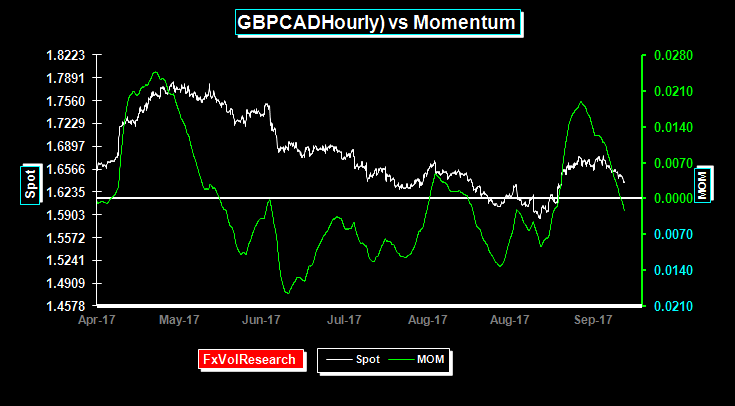 GBPCAD momentum has turned negative in line with the weakness seen in GBPUSD last week. 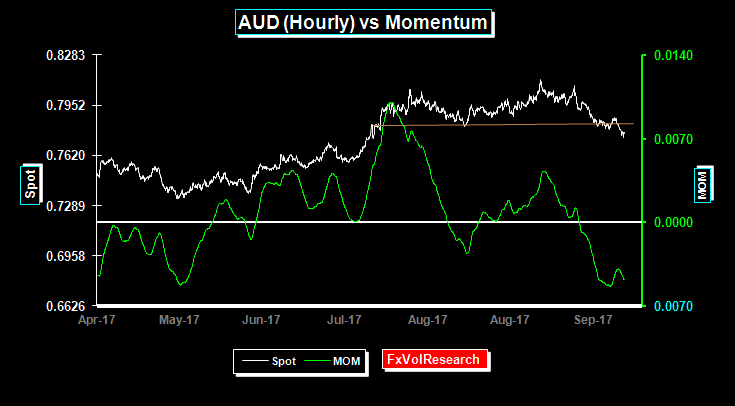 Weak retail sales figures, combined with some dovish talk from an RBA member is weighing heavily on the AUD. The Australian economy in some respects mirrors the situation in Canada, namely high levels of household debt, dependence on the resource sector and elevated house prices.

As the chart above shows the AUD momentum continues to drift lower while the spot is below support @ 7800. What was somewhat surprising was last week there was not a significant move in Australian risk reversals. Based on percentile rankings they still look cheap for AUD puts relative to calls particularly in the back end of the curve. 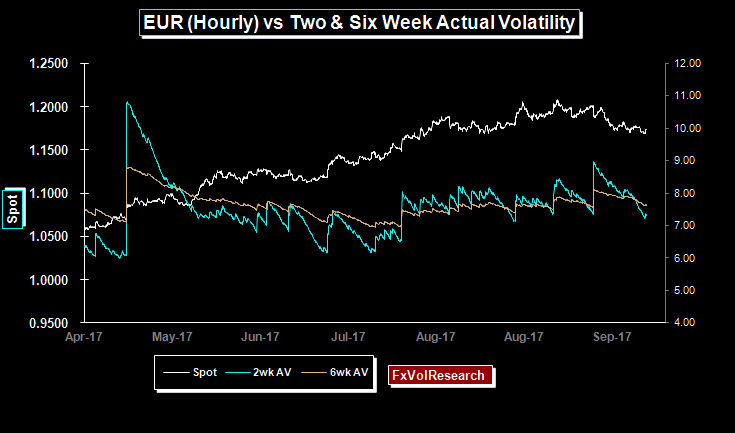 Short term EUR actual vol is trying once again to move lower, consistent with the sell of in the implied vol curve. As vol declines the odds of consolidation price action emerging increase. We view this EUR decline as a correction in a larger USD bear trend. While the headline NFP number was discounted the bond market reacted to the clear signs of rising wage pressures and that in turn lead to a short-term sell of in US Treasuries.

However, the 10YR was unable to sustain levels above 2.40. Earlier in the week, European producer prices rose faster than expected and keeping alive the prospect of an earlier end to QE in Europe. As mentioned here before, when judged by relative growth rates the potential for accelerated rate hikes in Europe is greater than the US as the European economic recovery is in the early stages, while the US cycle is more mature. This is part of the rationale behind the persistence of EUR strength. 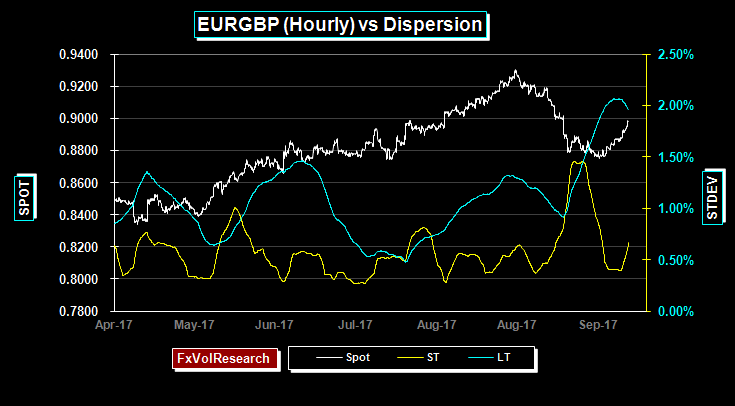 EURGBP once again looks soon to re-establish the EUR bull trend. Politics is quickly becoming a driver of the cross rate. Two weeks ago it looks to this observer that the May government would be successful in gaining wide support within her government for a two or three-year extension of Britain’s relationship with the EU. However, divisions within the Conservative party reasserted themselves at last weeks Tory party conference and May may not be able to keep her fragile government together for much longer. 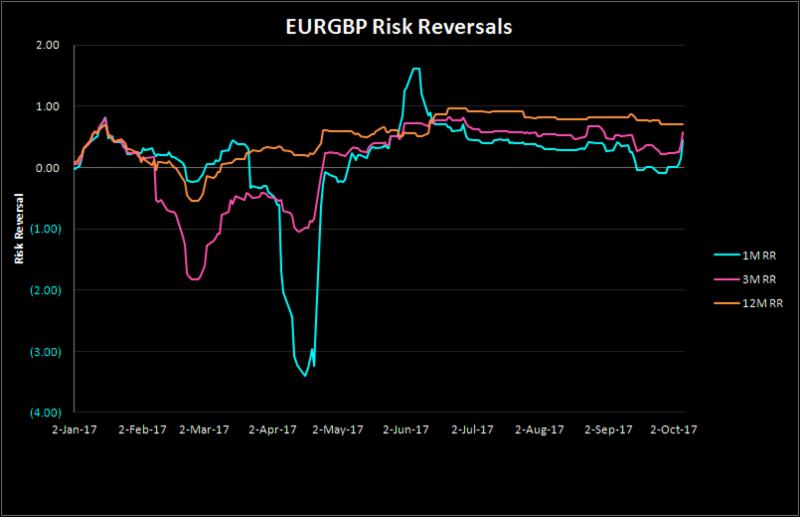 EURGBP risk reversals bounced back in
favour of EUR calls. Politics is once again starting to be a major driver of EURGBP. Calls for PM May to resign gathered pace following the Tory party conference, and if that were to occur it would both increase the uncertainty over the UK’s Brexit negotiating a position and increase the chances of a UK general election.
Similar to EUR above, buying three-month EURGBP calls spreads is a good way to express a continuing GBP weakness going forward. EURGBP vols are not out of line in relation to the actuals, while the skew is historically high in terms of the premium for EUR calls. For example, buy the 90 EUR call and sell the 93 EUR call for 3-Months expiration. 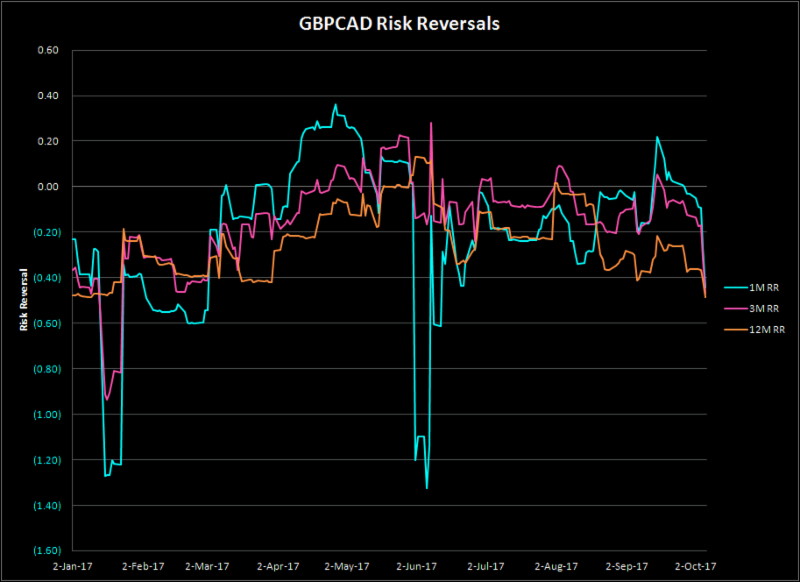 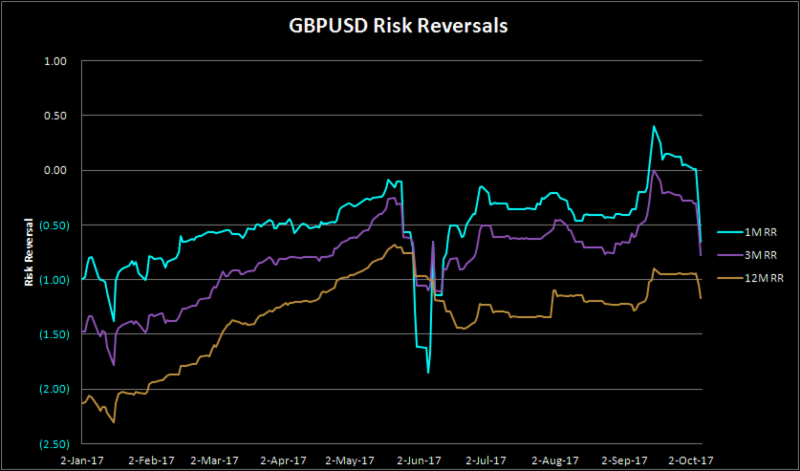 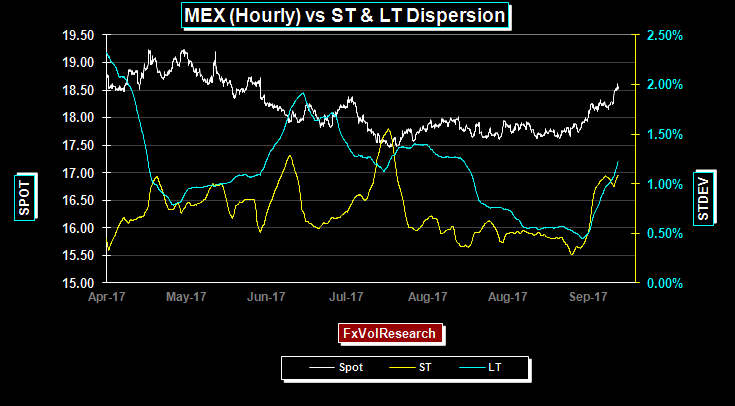 As mentioned here, the MEX Peso cannot consolidate forever and this last week we have started to both the ST and LT dispersion indicators rising with the spot now above 18.00. The market’s complacency with regard to the on-going NAFTA talks is starting to fade and the reality of the protectionist policies of the Trump administration is starting to hit home. These concerns apply to Canada just as well and the upcoming round of US-CAD-Mexico trade talks are going to be key. 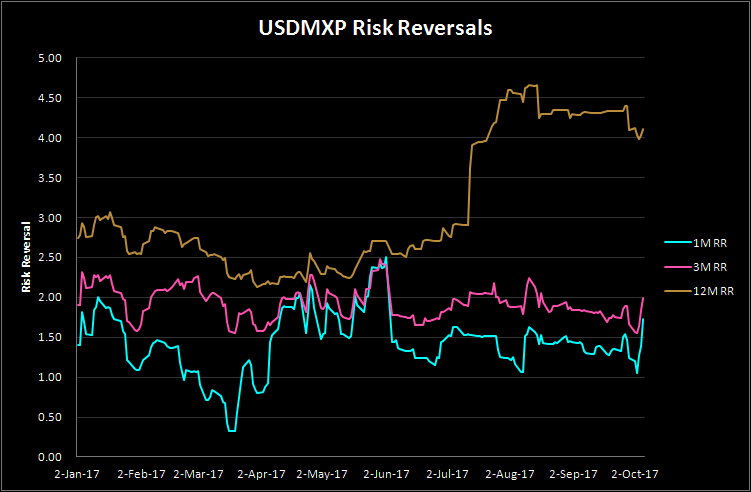 MXP risk reversal move better bid for UScalls as the spot broke above 18. As you can see the move in the one year was less dramatic. 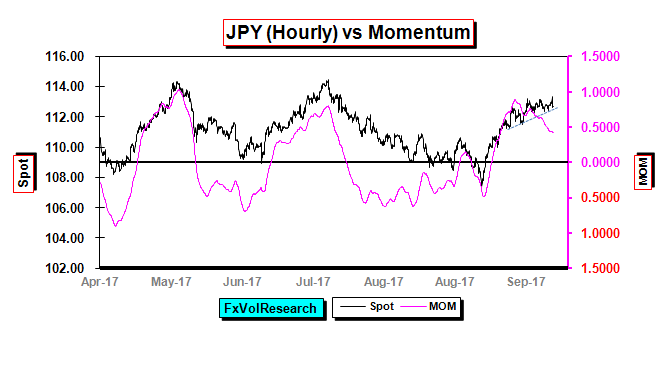 Some weak signs of momentum divergence in JPY leading to a larger Yen rally in the near term. While the market is largely focused on the correlation of JPY to the 10Y UST,  at the same time some of the inflation stats out of Japan are starting to improve. If price pressures increase there is less need for active government support to weaken the Yen. 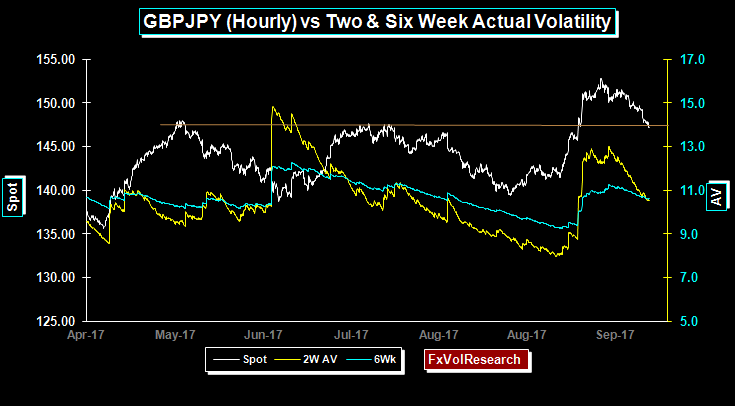 GBPYen ended the week holding an important support level. Should support give way a sharper decline to 140 is the preferred call.
Source: James Rider – http://bit.ly/2xuH69f